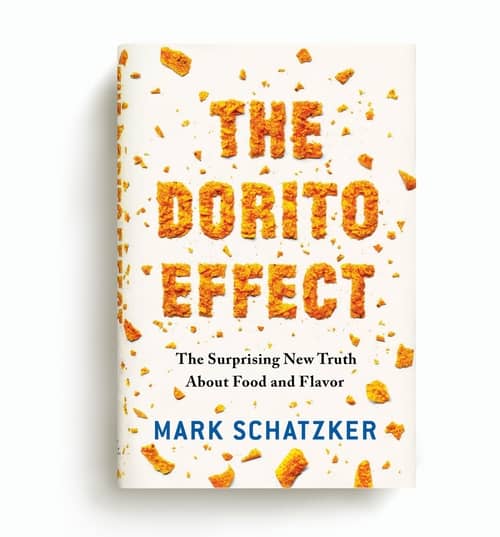 The chilli is a strange thing.

The stereotypical view still has it that their pungent flavor is used to cover up bad tastes such as those of rotten meat; but they themselves actually have quite distinct aromas, if only one gets around the obvious impact of their pungencies.

So, when I got the chance to interview Mark Schatzker, author of the newly released “The Dorito Effect,” this is where we started off our conversation. And we both agreed: chilli is perhaps a bit too “loud” in its obvious effect on the senses, but there is a great diversity of chilli and of flavors they offer.

Flavor, that is the topic that Mark Schatzker’s “The Dorito Effect” is all about; its loss and its importance.

Now, when I speak of the loss of flavor, I don’t mean losing one’s sense of taste (fittingly, another popular complaint about the popularity of chilli, aside from ever-higher pungencies, is that it is used more and more only because fewer and fewer people have a good sense of taste). Rather, the theme is the true loss of flavor, in and of the foods we eat.

One of the main examples in “The Dorito Effect,” chicken, is only too good a case in point.

Chickens have been bred for high productivity and efficiency, but flavor was never a consideration. So now, chicken tastes like cardboard (and there are other “flavorful” descriptions for it) – and as John Oliver just pointed out in a part of a segment on chicken farmers, we describe so many things nowadays as “it tastes just like chicken” … even as chicken doesn’t really taste of anything anymore.

This, however, is not how it was and how it could and should be. Salt and pepper used to be enough “flavoring” for a roast chicken (as Mark Schatzker points out, looking at cookbooks from 1900)… and the same applies to foods such as vegetables. Says Mark, we’ve made so much food bland, it’s no surprise people don’t want to eat it.

After all the juicy complaints in the book, about all the various diets Americans have tried in the search for a silver-bullet to solve the problem, I couldn’t resist asking if a “High-Flavor Diet” is, then, what Mark would suggest as the silver bullet to end all diet problems…

So, you argue against silver-bullet diets, but having just finished the book, I feel one could conclude that you argue for a “high/good flavor diet”?

Yes. A high-flavor diet might do the trick. The challenge is just, in all the ways we’ve tricked ourselves, to remember that it would not be about things we’ve come to think taste good, thanks to all their various flavorings, but about real flavor, which is the flavor that gets expressed by a plant or animal, naturally.

And what, given all the complaints like that one hears, if you can’t afford greens and fruits? What if you hate broccoli?

One, about the price: I don’t entirely believe it. If I go to McDonald’s with my family, I easily pay 30 dollars – and I can cook a very good meal with a decent kind of protein with that, and it will taste much better. Not that there aren’t people with real financial problems, but it’s the same as with time: many people say that there just isn’t the time to cook, but it’s a matter of priorities. People do have time to watch TV…

And, if you hate broccoli? Then don’t eat it.

But consider that not liking broccoli may be a result of how it’s cooked. Maybe it’s a memory from when you were a child. Maybe they aren’t good, flavorful vegetables you have been getting. So, try a different variety.

Be open-minded and remember that your palate is not that fixed thing that must remain the same as when you were 8 or 18; palate does change. Try. Learn how to cook it. I used to not like broccoli; now I enjoy it. I like Brussel’s sprouts.

And if you try and you still hate broccoli? Then eat something else. There are so many vegetables, chances are you won’t hate all of them. If you do, there’s fruit. (And there’s good, real, flavor and nutrition in actual fruit just as well.)

So, you speak of that view of people as “calorie zombies” (seen as chasing after nothing but salt, sugar, and fat – mainly calories) or as “foodies” (who are well aware of and looking for flavor, which marks nutrition)… Is that nature or nurture that some people seem to be the one or the other? Can we (re-?)learn to prefer the real flavors over the junk food?

We weren’t designed by evolution to kill ourselves.

Flavor is the language that mediates this interaction between what we need and what we want – but we have crossed wires… We evolved in an environment where only cherries taste like cherries. They have got sugar as well as vitamins as well as fiber, as well as the diversity of secondary compounds. But now we live in an age where candy also tastes like cherry. And candy’s only got sugar (even if it tastes like cherry).

It’s also a problem of the short-term. Junk food that gives the flavor artificially tastes good in the moment, but it doesn’t do good.

How can we (re-)learn nutritional wisdom, then?

We should  become more aware about flavor and how it controls eating choices, and be suspicious of synthetic flavors. We need to care more about what we eat (and what it does to us), and perhaps pay a little more for real food that tastes better.

It’s also a question of a better food environment. With a little bit of discipline, we could make the bowl of cherries taste better. We need to incentivize farmers to grow better tasting produce, then people will be more inclined to eat it.

We eat what’s nearby. If we make it less easy to grab for junk food, get more real food and get it closer, that will help, too.

Still, the big issue is this: if the food tasted better, people would be more excited about eating with it and cooking with it… and maybe then we wouldn’t have this problem (of obesity, of a  seeming preference for junk food).

And, what does one do if there is no culture of good eating that wants flavor? Are we underestimating people when we argue that some will always just look for cheap and easy?

Some people probably always will, but that’s no reason to give up.

On the other hand, even “foodies” fall prey to fads, and there’s a backlash already against those who seem to care so much about their food…

Well, sometimes people can be annoying because they turn what should be simply living into a trend; wear it like a badge… but, it’s still important.

I think it’s a situation where we think we know more than our bodies do. Is raspberry or blueberry a superfood? I like them because they are delicious…

The biggest danger there lies in thinking that eating a few of these berries will make me happy or healthy. That is how pharmaceuticals work, not food.

We need to understand that a lifetime of good eating prevents disease, but when you get a terrible disease like cancer, no food will cure it.

With that great comment, enjoy, and remember that you can enjoy great food with high nutritional value – just pick flavorful food, not flavored food-like substances (to mix Mark’s and Michael Pollan’s concerns and phrasings).

Fittingly, as I turned off skype, my wife appeared in the doorway stating “I want fruit.”

Off we went to the supermarket, carefully choosing the fruit that looked the most appetizing and smelled of flavor.

And while there, a mom and young daughter went past the cherries, the mom exclaiming “7 Euro per kilogram?!?”. I wonder if they promptly went past the chips or chocolates afterwards, which are just sugar (carbohydrates) and flavorings, and excitedly found the ones for “only 1.50 Euro” – So, somewhere between 7.50 and 15 Euro per kilogram, without (m)any of the secondary plant compounds or even just fiber that do a body good …

(Nothing against chips – I’ve used them as cultural-culinary symbols before – but they aren’t real food. Said Mark as example of how we’ve “got our wires crossed”: Imagine chips were nothing but the potatoes or corn they are made of, fried, maybe with salt, but none of the usual flavorings. Would people buy them so much?

Same with chocolate: Cacao is very rich in secondary plant compounds, but there’s a big difference between a real chocolate made mainly from cacao, with sugar being a secondary ingredient to make it taste better, and the so-called chocolates which are really candy bars, where cacao plays second fiddle at best.)