My paternal grandmother was one of those for whom cooking well meant using animal fats. Meats had to be juicy – “and come, take some more of the juice, or you’ll get lung-sick,” she used to say – and lard was the substance of choice. Central European cooking is well known to be pretty heavy and strong on meats; much of American cooking seems to have gone completely overboard with that. No wonder, then, that those concerned with healthy eating would be very concerned about fat and oil.

Now, don’t get me wrong. Chinese restaurants generally overdo it (and I’m trying hard to completely forget about the little matter of MSG in overdose). I’ve seen and heard of people who use the complimentary cup of hot water or tea that is ubiquitous in restaurants in China to wash some oil off leafy greens before eating them…

I’m talking about home cooking here, where the importance of oil is still noticeable. Even if you’ve only followed the news, you may have noticed that one of the issues people in China (and India) are particularly concerned about when it comes to rising food prices is the rising cost of oil. (Yeah, it’s not just crude oil and gas prices the world worries about, some still want to eat before they drive – and some don’t even eat while they drive. The horror.)

Of course, when you are in the country, you notice it even more. The usual bottle size for cooking oil is close to a gallon of it; it seems crazy to a European used to 1 liter (1/4 gallon) bottles. And, it seems even more crazy when you consider that we’d only get more oil if it were for frying, and prefer non-stick pans because you can use them with very little oil. It easily appears like it’s all just old habits, and unhealthy ones at that.

Then, however, you start eating Chinese food, and you notice that something’s different. Not least that vegetables which seemed pretty bleh before are suddenly tasty. Most people assume that it’s mainly a matter of MSG, but I’m telling you, it’s not (quite) that.

The “standard preparation” I’ve learnt will start with a layer of oil in the pan, lightly frying the ingredients, then adding some water. Depending on ingredient, it’s just a few spoonful in the hot pan to melt salt and diffuse the flavors, a bit more for a little steaming, or more again to  get things cooked tender, if that’s what the ingredient requires.

What this does is that it brings out the flavors nicely. Flavors of vegetables themselves, but also aromas of spices, if you start by putting chile peppers (and/or garlic and/or ginger or Sichuan pepper) into the oil. This approach is a staple of Hunan/Xiang cooking, which isn’t real if the smell of chile pepper doesn’t get you into a near-fit of sneezing and announces even to passers-by that something’s cooking.

Not only that, but the slight frying also contributes to different textures, making the vegetables not boiled so much as to become soggy, but retain a certain crunch. Chinese cooking, especially of vegetables, even goes to the point where different parts or preparations are sometimes employed, and differentiated.

Meats do come back into the picture, but most of the time they are not the central event, but just a supporting act. Again, having some meat – often enough, a rather fatty cut at that – is seen as a good thing, but what an American would consider a small portion for one is rather enough for three different dishes, mainly consisting of vegetables for two here. Oil and fat, there may seem to be more than enough of, but it’s just the right proportion for good flavor and substantial nutrition. 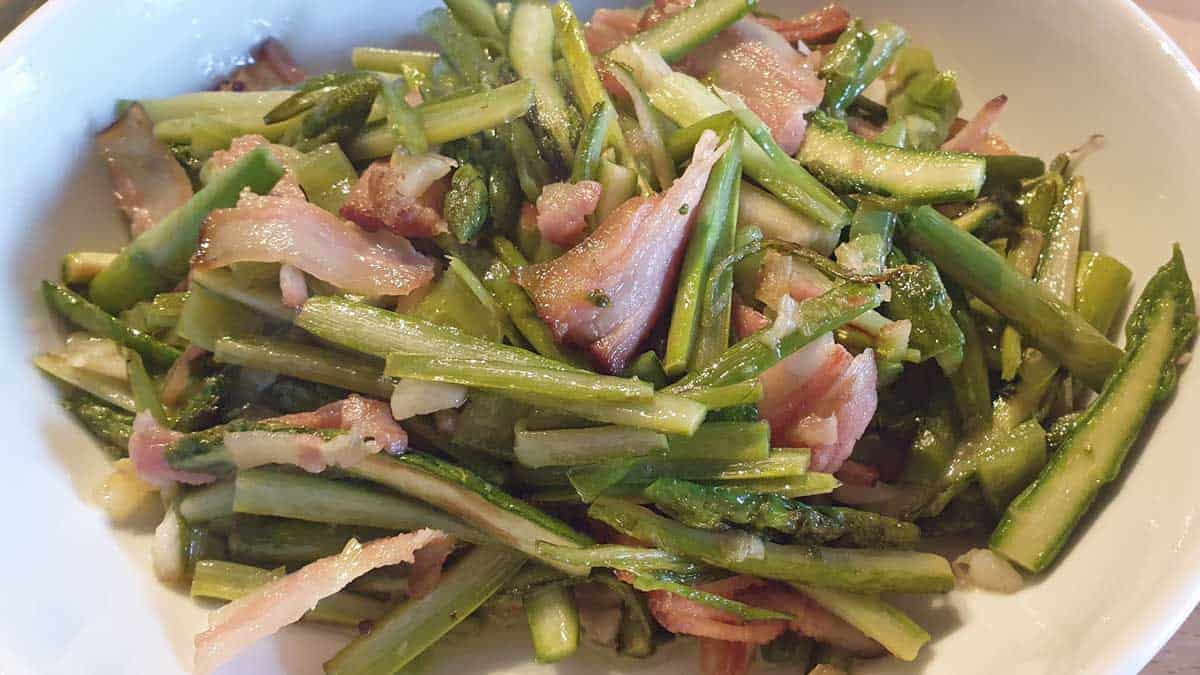